This drink is a lower-sugar version of the traditional apple pie, popular amongst Midwesterners. It is delicious served hot or cold.

A great bonus for those who like to entertain (make it while guests are there), the best part about this drink is the apple cider scent it fills your home with while the drink is simmering. This drink is great for fall or holiday parties, campfires, or football/sports games.

This apple pie alcoholic drink is dangerously strong so be careful. It’s made with a full bottle of high-proof alcohol, Everclear®, which is more than twice the strength of vodka (and the 190-proof version is illegal in 11 states). The alcohol, however, is hard to taste behind the warm, spice-filled appley sweetness.

This recipe is made with five simple ingredients: a gallon of apple juice, a gallon apple of cider, organic cane sugar, cinnamon sticks, and a bottle of grain alcohol.

What type if alcohol should be used? I recommend using 151-proof (or 190-proof if you’d like it REALLY strong and it’s legal in your state) Everclear.

All you need to make this recipe is a large pot. Since the recipe makes two gallons, a stockpot that holds at least 9 quarts is the minimum size needed. If you don’t want to send the money or don’t have this option at home, you have a few options:

How to Make an Apple Pie Drink

In a large stockpot, combine apple juice, apple cider, sugar and cinnamon sticks. Bring the mixture to a boil. Allow it to simmer until sugar is fully dissolved, about ½ hour, or up to 2 hours for extra cinnamon flavor!

Remove the pot from the heat and heat and allow the cider mixture to cool completely. Once it’s somewhat cooled, stir in the grain alcohol. Serve hot or over ice.

Can this be made in smaller batches?

Yes, this recipe makes quite a lot — 2 gallons. Feel free to cut it in half or even a quarter.

Should this recipe be served hot or cold?

It is delicious either way.

What is the difference between apple cider and apple juice? Can I substitute apple juice for cider?

Yes, apple juice can be substituted for the cider in this. After the addition of cinnamon, sugar, and simmering, the end result in terms of taste will be pretty similar. The cider is recommended mostly in terms of appearance as the juice has less of a cloudy, more transparent look to it.

While this is a wellness blog, as I believe wellness requires balance, I do not consider this recipe healthy. The sugar, however, was cut in half which is pretty unnoticeable due to the overall sweetness of the recipe. Additionally, because the drinks are SO strong you may only want to consume a very small amount – resulting in less sugar consumption as well.

What is Everclear made from? Is it gluten free?

Everclear is made from corn and as a result, is gluten free.

What is moonshine? Is this recipe considered a moonshine?

Most moonshine experts consider moonshine a homemade, unaged whiskey. As a result, while many other versions online consider this apple pie drink with Everclear a type of moonshine, it technically is not.

This apple pie is commonly stored in the juice jugs used to make it (once it is properly cooled). I know many people who have stored this for months at room temperature and been fine, however as a safety precaution I recommend storing apple pie in the fridge.

What to Serve with Apple Pie Alcoholic Drink?

Serve this at a campfire alongside smores, hot dogs/hamburgers, and sweet corn. Serve it at a Thanksgiving/fall party alongside the other party food. Or serve it during football/sports with nachos, wings, and other appetizers.

If you love homemade party cocktails that are delicious (but also gluten free and/or healthier) then you may also like:

Please make sure to drink this responsibly as its strength is easily underestimated due to the strong apple taste of the ingredients. And of course, enjoy!

Here’s to regaining our sparkle together, 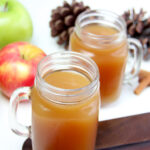 *I recommend using Everclear which I have not had any issues with and according to what I’ve read online is gluten-free and made from corn. However, if you do want to verify for yourself, they are owned by Luxco.
*You do not need to purchase a large stockpot to make this recipe. If needed, just divide it amongst smaller pots, make a half a batch at a time, or use half the liquid in the recipe during the warming/heating process then mix with the additional apple cider and juice at the end.

Please note: There may be affiliate links in this post! By clicking them/purchasing recommended items I may receive a small compensation, at no cost to you! I only link to/write about products/services which I personally use or have taken the time to thoroughly research regarding their ability to fit in with general guidelines for clean living. Additionally, statements on this website have not been evaluated by the FDA. For additional information, as well as information on allergens and your privacy, please visit my policies page.

I believe natural living and clean eating has helped me “regain my sparkle” and can help you regain yours! (Plus keep things like they used to be with healthy cocktail and gluten free party recipes). Learn More About Me